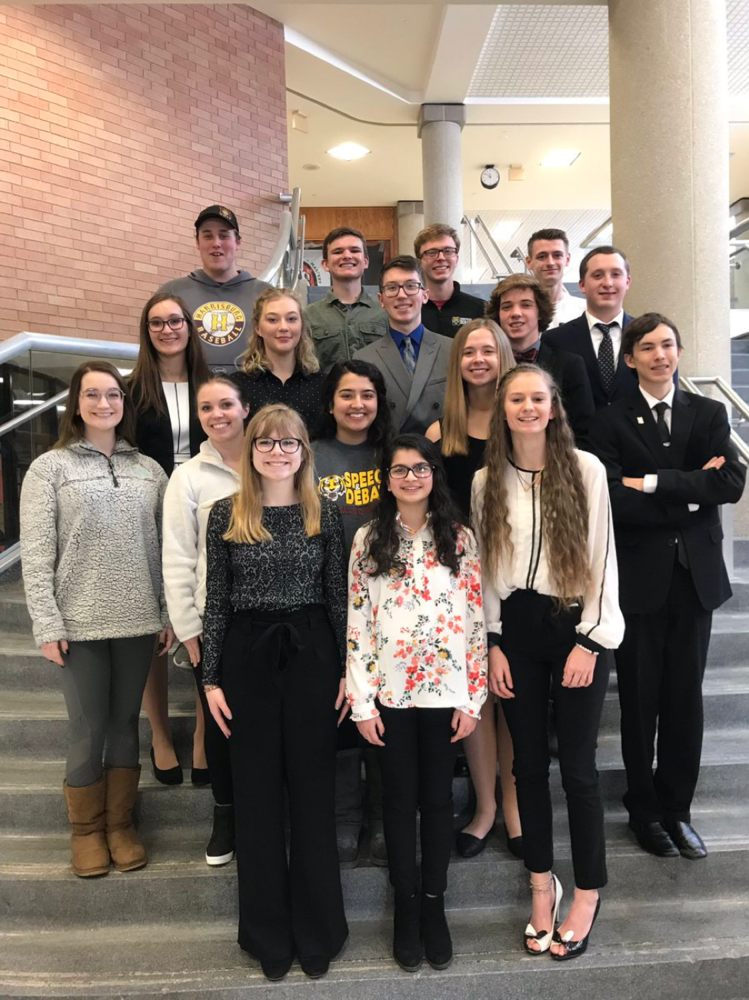 The Harrisburg HS debate team is busy prepping for nationals after a great season.  Six members qualified including the public forum team of Kendall Larson and Carter Lucas, the World Schools debate team of Grace Anderson, Ryan Corcoran, and Braden Culp, and Tuba Ali in original oratory.  The team will travel to Dallas, TX in June to compete against debaters from around the US.

The team had a strong season with a number of tournament champions.  The team of Larson and Lucas placed first in the varsity public forum division at the Fargo Shanley tournament, with Anderson and O’Connor placing first in varsity public forum at the Sioux Falls Lincoln Silver Bowl.  Anderson and O’Connor also finished as runner-ups at the Yankton Lewis & Clark Invitational.  The novice public forum debate team of Madison Dick and Eli Schipper finished their season with a run of three first places at tournaments in Yankton, Huron, and Harrisburg.  Also at the Huron tournament, Kaytlyn Hilligas and Braden Culp went 1-2 in student congress, and Ali placed first in varsity original oratory.

The debaters also earned additional accolades, with Carter Lucas receiving a Donus D Roberts senior award as one of the four public forum competitors recognized by their peers as a top debater in the state. The graduating seniors Lucas, Larson, and Culp were also awarded Academic All-American status by the National Speech and Debate Association.  To receive the honor, students needed to have earned at least 750 competition merit points, completed at least 5 semesters of high school, demonstrated outstanding character and leadership, and earned a minimum GPA of 3.5 on a 4.0 scale.