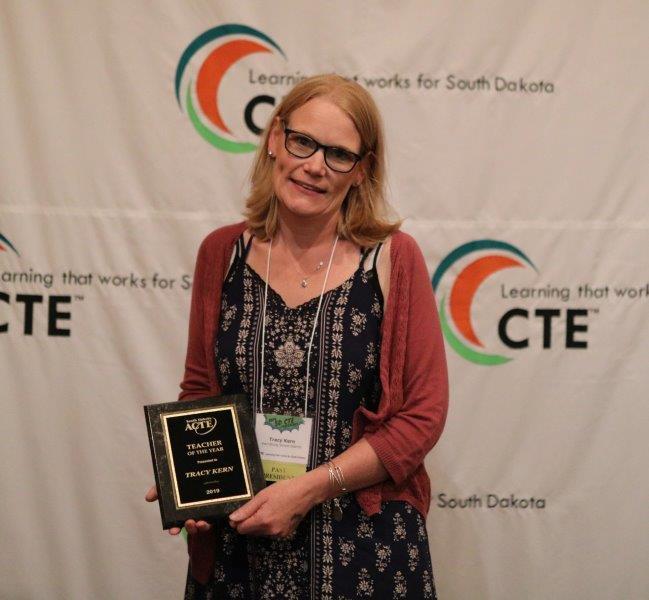 The South Dakota Association of Career and Technical Education is pleased to announce that Tracy Kern, Family and Consumer Sciences Educator at the Harrisburg School District, has been named the SDACTE Teacher of the Year.  Mrs. Kern has been selected because she has demonstrated innovation in the classroom, is committed to her students, and is dedicated to improve her CTE program.

She has been instrumental to develop a class to encourage students to pursue a career in education.  A dual-credit class entitled Exploration of Teaching is offered in partnership with the University of South Dakota that exposes students to a variety of educational topics and a 15-hour practicum experience.  This past year she was named advisor to a CTSO called Educators Rising.

Mrs. Kern also serves as the advisor to the FCCLA chapter where a majority of the members compete in some type of competitive event.  During the past five years eight different teams have qualified for national competition where all received a gold rating, has had three state officer and two of them served as the state president, and several regional officers and numerous State Leadership Team and Teens as Teachers members.  The chapter has performed a great deal of community service including the Angel Tree, 8th Grade Career Fair and Game of Life Day, and initiated the Celebrate My Drive Campaign where the school and community was awarded $100,000 grant money.

The majority of her Family and Consumer Sciences classes are inquiry-based or projected-based learning.  Using a customized learning format, the students can apply real-world scenerios to technical, academic, and employability learning.  Working on developing soft skills is another area covered in the CTE classes.  She has been involved on the SDACTE Board of Directors and in 2016-2017 Mrs. Kern served as state president of this organization.  She is also involved at the Region V level.

Mrs. Kern now qualifies to compete for the Region V Teacher of the Year.  The Region V Conference will be held in Lake Tahoe, NV, on April 22-25, 2020.