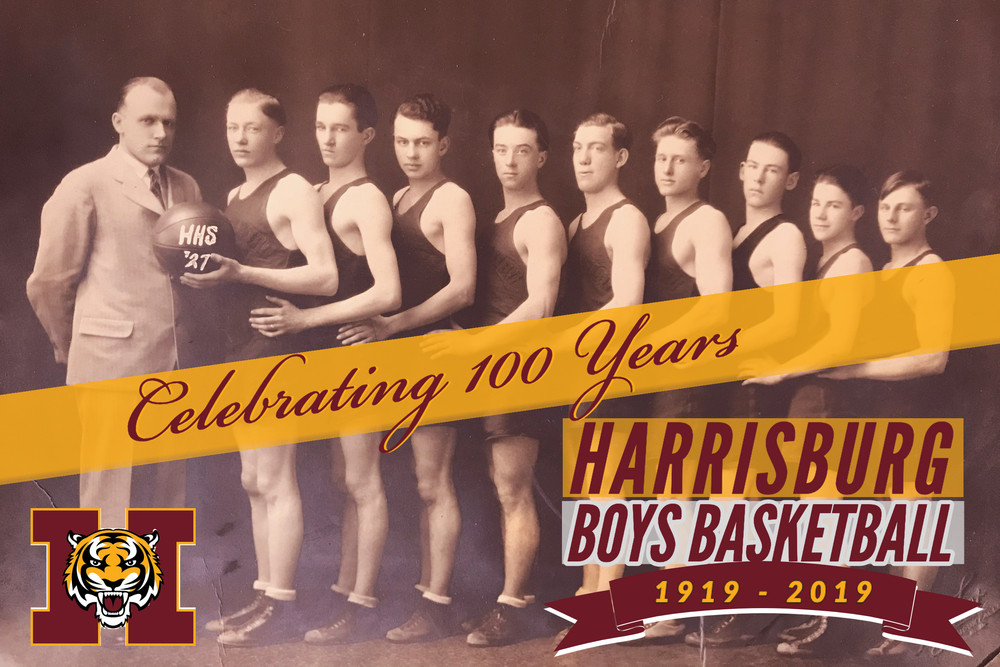 Development of Basket Ball in Harrisburg

During my first year in Harrisburg, 1919 – 20, I took part in forming an independent team; we played a few games, but there was very little interest shown. No one seemed to realize the fine sport and opportunity for real exercise, as well as community function, which would bring real interest. 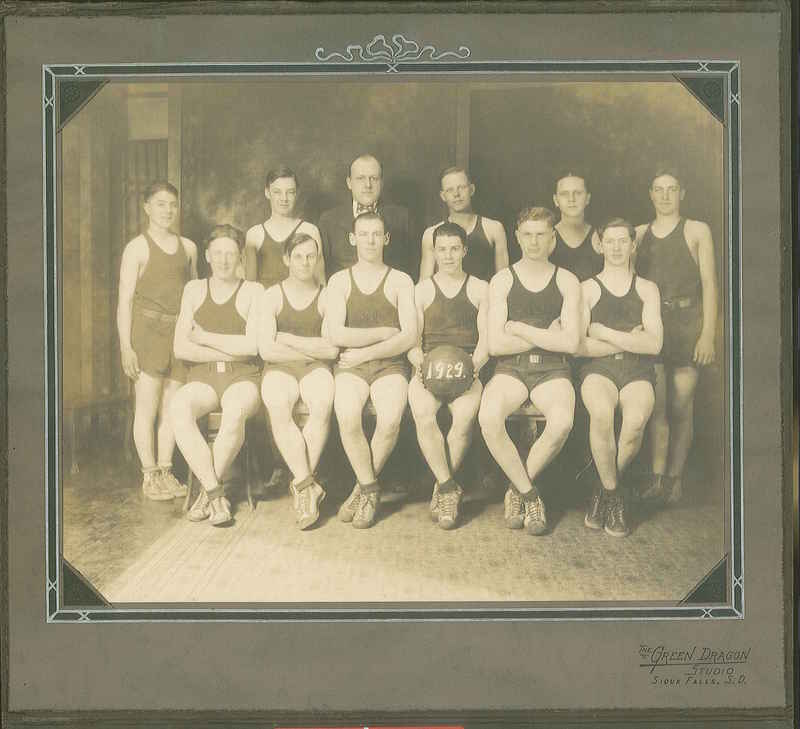 In the fall of 1919, I was employed in the high school to teach three hours and 20 minutes each day, handling of the sciences. I went before the school board, and after several long, Frank, and open discussions, they permitted me to use the last period of the day for basketball. Of course, we were quote up against it "for a place to play, and began to play on a tennis court east of the school building. We had many heated practices there. But after several sessions with the Board, and doing some scouting around, we were able to induce the board can pay rent on the Hall of $60 for season, but they felt they could not furnish us with any equipment, or even provide stoves to adequately heat the building. 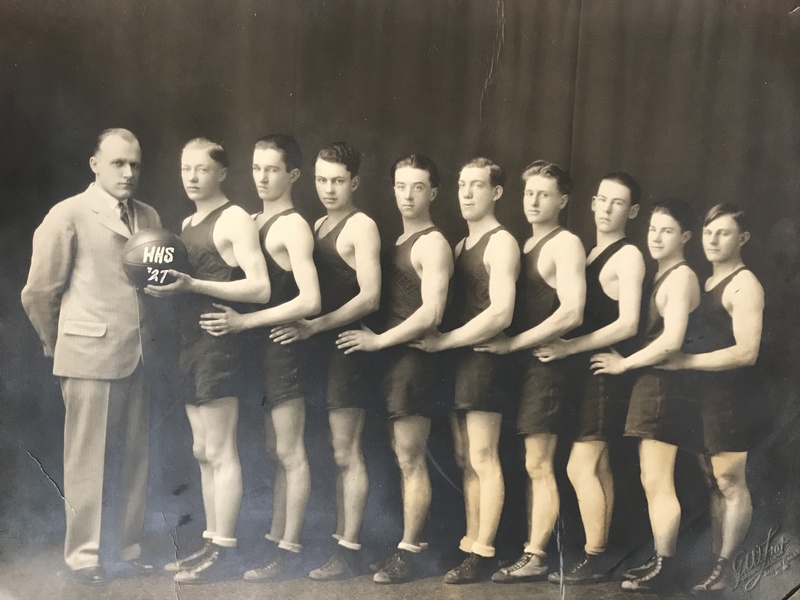 We formed an athletic Association, of which Archie Everson was elected president and Gladys Simmons was secretary– treasure. Of course we had no funds but started with high hopes. We selected seven outfits for the boys, consisting of shirts, trunks, and hose. Each boy bought his own shoes. We also ordered two basketballs, the bankboard rings and nets. We bought material and build the bankboards, painted lines on the floor, wire netting over windows, etc. Mr. Sam Swartz was janitor of the schools at the time and took a great interest in making it possible for the boys to play. He built, with my help, lockers, or large chests, which would lock; He was always ready to do any task for us that we might play: carry fuel, building fires, etc. The parents seem to think it was unnecessary for the boys to spend any time outside of school hours for practice, several of the boys worked with the janitor and me until late hours many nights before we were ready for our first practice. I advanced $60 to pay for this material, and the students, balls and other things that we might “get going." 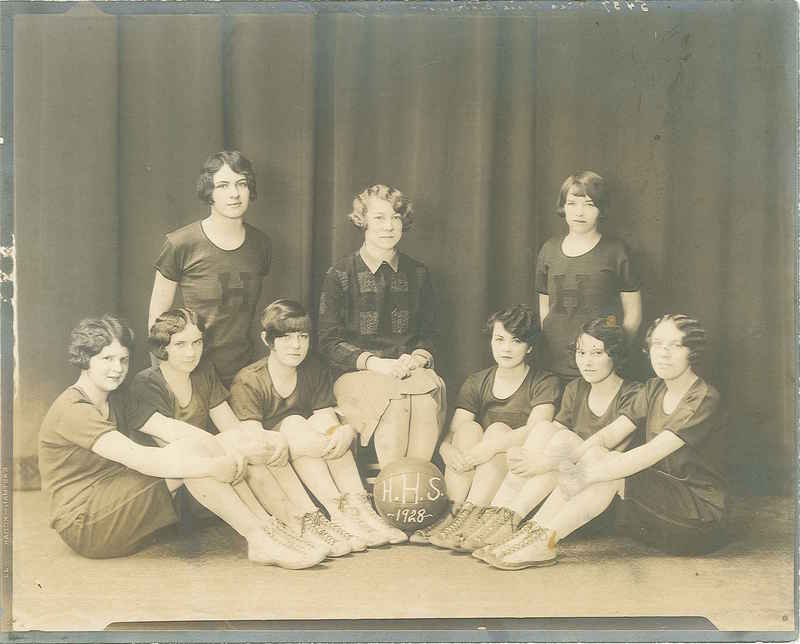 We used three evenings a week for practice, besides afternoon periods. Most of the boys had never seen a game before they went to play our first game at Lennox. Well, Lennox had a strong team and of course the results were bad. It took some hard and earnest effort to get the boys to go into it again with any heart. I think the score of this game was 48 to 8. Our next game is with Humboldt. Results were nearly as bad and this time the girls went along and were defeated 104 to 4. They had just started practice that same week; the other team had been champions the year before. During the first year we lost most of the games. Winning only two games, one at Rowena and the other with Rock Valley, on our own floor. These were near the end of the year. 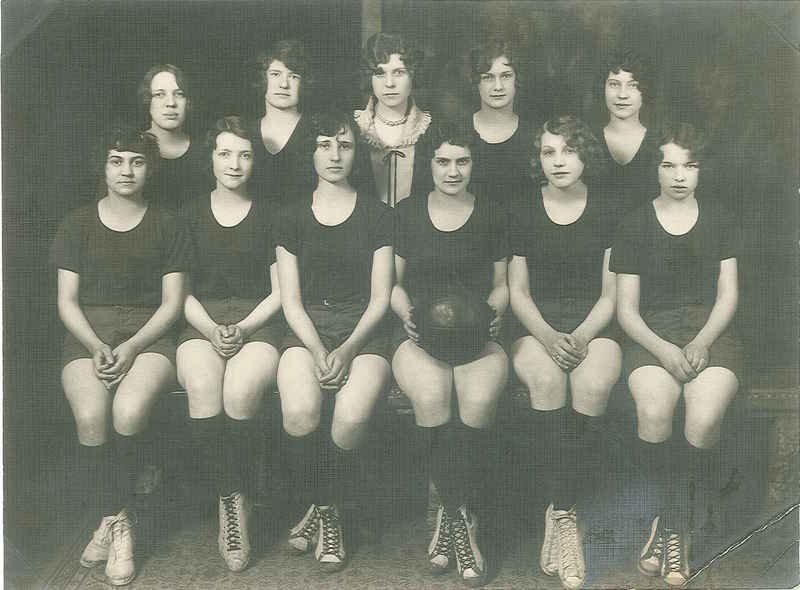 We had only eleven boys who practiced regularly and some of them were very small. Archie Everson and Harold Swartz were the regular forwards, Virgis Harris was center, Toy Haywood and Russell Parks were the guards. However, during the last part of that year, Louis McCain and Wesley Simmons Word in many of the games did good playing. Edison Blue and Roy Krebs were good and earnest workers and played some games. Ralph Zebrath was very small, but always practiced, and was in a few games. Seven heavy sweaters were given and the team presented the coach with a sweater.

The folks at Harrisburg began to take interest after the first few games, and before the season ended we had nearly $350. Of course, I was reimbursed and we bought some more outfits, new balls, etc. We went to the tournament at Sioux Falls and were defeated by Lennox in our first game. Lennox was in the finals against Sioux Falls.

The next year we had good backing from the town's folks, but again the School Board seemed to think they must conserve the people’s taxes. So we were forced to finance ourselves again, but did very well. We had lost Everson and Harris, two good men, but several others joined the practices and we were soon going. McCain and Simmons were at forward positions with Swartz and Parks at guard positions, and Haywood at center. We won our first game from Valley Springs with a score of 32 to 14. During the year we broke even on games and played several large towns, including Sioux Falls; beating them on our own floor. In the regional tournament we defeated Garretson and Lennox and went against Sioux Falls. At the half we had a lead by six points, but during third-quarter and large boy of Sioux Falls team came down on Haywood’s ankle during a jump ball struggle. I took him out of the game, as a small bone was broken. This broke up the teamwork and we were soon in arrears. He begged so hard to go in, saying he was O.K. After the doctor had bound his ankle I let him go in but we could not get going again. However, it was a very tense game. The boys all played a true sportsmanship game. Swartz playing at guard was high point man of the year. He had spent hours every week in the shooting of long ones from the center. In the first half against Sioux Falls he had six baskets from the center of the floor in the Coliseum.

The next year Mr. Price came and it in as the new Coach and he was a wonderful fellow. He had lots of new ideas and with most of the old fellows who now had learned the game. The boys won most of the games, and I believe, did the best of any year until this past season. I understand that your team has the record. Well, I hope this will help you some, and these are about the some of the facts. Mrs. Blackburn was interested in the girls team and we always accompanied the teams everywhere they went. Sometimes, we did not get in until late, and once we were stranded in a snow storm, but kept trying until we finally had all the folks home by 6 AM.

Those days are the high spots in my memory. I will never forget the fine loyalty of the boys and also of the many fans to help us get  started. I wish you well and many returns in the future years of the game of life. 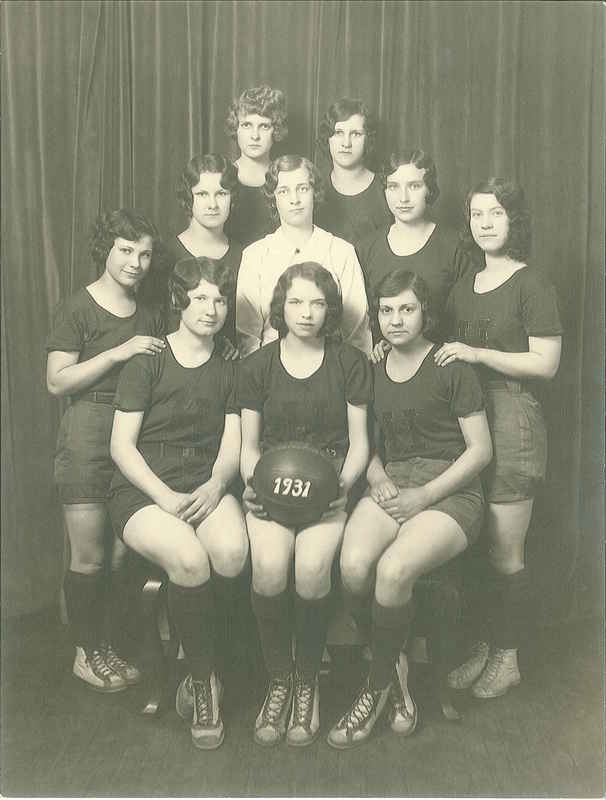