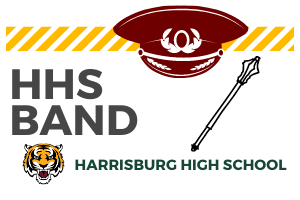 The Persistent Pursuit of Music

As everyone has noticed, this year is peculiar, especially concerning fine arts groups, such as band. Jason Groon, the band director at Harrisburg High School, stated “Now more than ever, it is important that we have opportunities to come together, make music, and participate in an ensemble that is greater than the sum of its parts.” The strange present we live in has impacted most everything in life; meanwhile, both bands at HHS have adapted to a “new normal” in which most instruments have bell covers and the band itself is split in two in order to social distance.

Even with all of the chaos that has occurred, the directors continue to teach as usual. Groon continues to provide opportunities for the students to play instruments and create music. The HHS band teacher decided to become a band director during the last couple weeks of his senior year of high school, figuring he needed to plan for college. Student tutoring his senior year and a long-time admiration of music became the driving forces behind his path of teaching. Along the way, Groon created his own personal teaching style, stating, “We continue to operate under the philosophy of being ‘better today than we were yesterday. My goals are that we continue to improve as an ensemble and have the opportunity to showcase our growth in concert.”

Coming into the program this year, assistant band director, Spencer Wahl, also hopes to help the bands grow. “I discovered in my previous teaching positions that the key to having an exceptional band is building positive relationships with students and staff members. I think people will ALWAYS work harder for you if they know that you genuinely care about them. Wahl has taught at other schools in the area before landing in Harrisburg and aspires to be an influential figure in his HHS students’ lives. Even as times remain uncertain, the Harrisburg High School band directors continue to strive for the growth of their students. The group is eager for their performance on Tuesday, October 27th, at 7:00 PM.