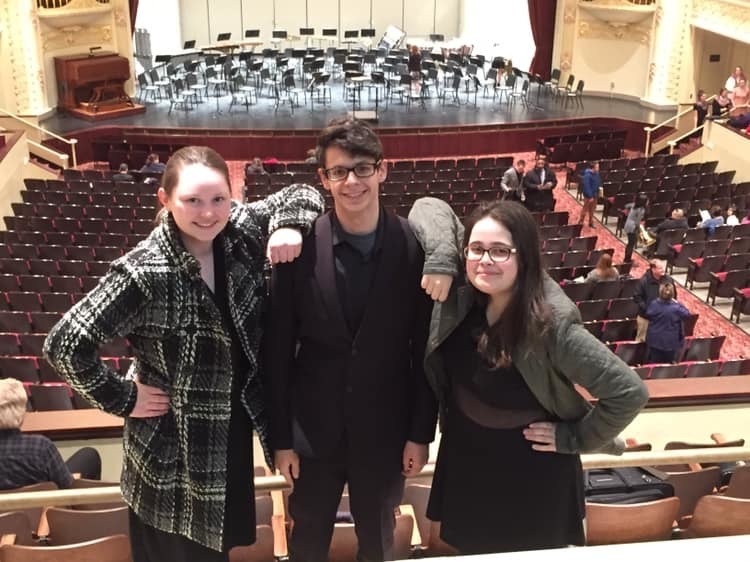 The snowy days and frigid temperatures of the past few months did little to slow down members of the Harrisburg High School band. Over the past three months, students have been busy participating in performances and events around the region.

The winter sports season provided several opportunities for the HHS Pep Band to energize the home crowd at basketball games. The Pep Band also partnered with 3rd-5th grade students from Endeavor Elementary to provide entertainment for Harrisburg Community Night at the Skyforce game. The band provided pre-game entertainment, followed by students from Endeavor singing the National Anthem. At halftime the pep band, HHS color guard, and Endeavor’s Jambo Djembe joined forces to entertain the crowd with a combined performance.

January and February also brought several opportunities for HHS band students to participate in regional honor bands. At the end of January, three HHS band students participated in the Quad State Honor Band on the campus of USD in Vermillion. Selected through an audition in mid-December, Mia Adams (clarinet), Michael Schepp (flute), and Maycie Schultz (trombone), spent nearly 15 hours rehearsing over the course of two days in preparation for an evening concert on January 28th. The bands were under the direction of USD Director of Bands, Dr. John LaCognata, and USD Director of Athletic Bands, Todd Cranson. Students also had the opportunity to work with guest composer/clinician Rossano Galante.

In early February, HHS Senior Jalee Krueger traveled to Minneapolis to participate in the University of Minnesota Honor band. She spent three days on the U of M campus working with some of the best musicians in the region. The bands were under the direction of U of M faculty Emily Threinen, Jerry Luckhardt, and Betsy McCann.

And lastly, while most of their classmates enjoyed a 5-day weekend, HHS Seniors Mia Adams (clarinet), Michael Schepp (flute), Maycie Schultz (trombone), and Jalee Krueger (percussion) spent two days on the campus of South Dakota State University for the SDSU Honor Band Festival on February 15-16. The band was under the direction of SDSU Director of Bands, Dr. Jacob Wallace.

Throughout the past few months, the HHS Jazz Ensembles have also been busy with performances across the region. On January 22nd, HHS Jazz I invited four area jazz clinicians to come work with members of the ensemble in preparation for several upcoming jazz festivals. Dr. CJ Kocher (Saxophone), Jim McKinney (Rhythm), Jim Speirs (Trumpet), and Tim Storly (Trombone) worked with HHS students on refining their jazz style and technique, both as individual players and as a full ensemble.

On February 12th, both HHS Jazz I and Jazz II packed up their equipment and traveled to Mitchell for the Palace City Jazz Festival held at the Mitchell High School Performing Arts Center. Students started the day with instrument-specific masterclasses, as well as an introduction to jazz improvisation. Students also had the opportunity to hear other area high school jazz ensembles perform. The day culminated with outstanding performances by both HHS jazz ensembles, followed by a clinic session with regional jazz artists.

On March 4th, the HHS Jazz I ensemble made the short trip to Augustana University to perform at the 45thannual Jazz on the Upper Great Plains Festival. Students had the opportunity to work with regional jazz clinicians and listen to other area jazz ensembles.

Along with all the other performances over the past few months, HHS band students also had the opportunity to audition for the South Dakota All-State Band. Auditions were held throughout the day on January 19that Lincoln High School in Sioux Falls. In the months leading up to the event, students spend hours preparing for an audition that includes: a prepared etude, a prepared solo, sight-reading, 3 scales (selected from a list of 20 prepared scales), and a 50-question terms test.

As winter slowly transitioned into spring, the band packed up their equipment and traveled to the Washington Pavilion on March 5th, where 600 Harrisburg band students in grades 5-12 joined forces for the 3rdAnnual Band Booster Showcase. Students were able to perform for a nearly sold-out crowd at the event that features performances by ensembles from every grade level in the Harrisburg band program.

As the end of the school year approaches, the busy schedule continues for the HHS Band, with upcoming performances to include: Harrisburg Jazz Night, All-State Band, a joint concert with the Augustana Bands at the Washington Pavilion, the Optimist Jazz Festival, Region II Large Group Contest, All-State Jazz Band, a trip to St. Louis, MO, and the spring concert. For more information about our upcoming performances, please check out the band website at www.harrisburgband.org, or follow us on Facebook!